Don’t miss our latest messages, here is a list of them.

We are waiting to welcome you

Get in touch with us, send us your message.

Thank you! Your submission has been received!
Oops! Something went wrong while submitting the form

On September 27, 1954, Bishop David Olaniyi Oyedepo, a native of Omu-Aran, Kwara State, Nigeria, was born in Osogbo into a religiously mixed family. His father, Ibrahim, was a Muslim healer, while his mother, Dorcas, was a member of the Eternal Order of the Cherubim and Seraphim Movement (C&S), a branch of the Aladura Movement in Nigeria.

He was raised by his grandmother in Osogbo, who inculcated in him the virtues of Christian life through the early morning prayers which he attended with her. She also taught him the importance of tithing and other basic Christian virtues.David Oyedepo was “born again” in 1969 through the influence of his former teacher, Ms. Betty Lasher, who took special interest in him during his high school days. He studied Architecture at Kwara State Polytechnic, Ilorin and worked briefly with the Federal Ministry of Housing in Ilorin before resigning to concentrate on missionary work.

David Oyedepo also earned a Ph.D. in Human Development from Honolulu University, Hawaii, United States of America.David Oyedepo received a mandate from God in an 18 hour long vision in May 1981 to liberate the world from all oppression of the devil through the preaching of the word of faith. This is the inaugural vision that led to the founding of the Living Faith Church World Wide (LFCWW), first called Liberation Faith Hour Ministries, in 1981. Two years after, on September 17, 1983, Pastor Enoch Adeboye, the General Overseer of the Redeemed Christian Church of God, ordained David Oyedepo and his wife, Florence Abiola Akano (now known as Faith Abiola Oyedepo) as pastors and also officially commissioned the newly started church.

Five years after, David Oyedepo was ordained a Bishop.Living Faith Church (AKA Winners Chapel) started in Kaduna, but David Oyedepo moved to Lagos, the former capital of Nigeria in September 1989, to start a new branch after receiving an instruction from God to reach out to the population in Lagos. This Church in Lagos grew to become the International headquarters of Living Faith Church, with a constantly increasing flow of crowds spilling over to adjacent roads, and on decks of uncompleted buildings nearby, compelling people to stand for hours to listen to his teachings. This led to the building of the renowned Faith Tabernacle, as instructed by God.David Oyedepo is an acclaimed author and publisher who has written over 70 titles apart from periodicals.  He is also Chairman/Publisher of Dominion Publishing House (DPH), a publishing arm of his ministry.  DPH has over 4 million prints in circulation to date. Through God’s grace upon him, Covenant University, Landmark University, Faith Academy and Kingdom Heritage Model Schools have been established to equip the youth for impact. The largest church auditorium in the worldDn 1998, David Oyedepo set forth to build a new building to accommodate the increasing number of worshippers. This resulted in the Ministry’s acquisition of the initial 530-acre (2.1 km2) facility, known as Canaanland, which serves as the headquarters of the Ministry. It is the home of the 50,000-seat capacity auditorium, the ‘Faith Tabernacle’, which is reputed to be the largest Church auditorium in the world; a feat also recorded in the Guinness Book of Records.

The speed of the construction of Faith Tabernacle was breath taking, considering the size of the building. Construction of this gigantic project was completed within 12 months, which experts claim could only have been a miracle, because such a project should normally take a minimum of three years to complete. To the glory of God, this building was built debt-free. This 50,000-seat edifice was dedicated on September 18, 1999.Canaanland is in Ota, a suburb of Lagos and is a 10,500-acre (42 km2) campus that houses the 50,000-seat church building, the church secretariat, the church’s youth chapel, a primary school called Kingdom Heritage Model School, a full boarding mission secondary school called Faith Academy with over 1,500 students, and Covenant University which accommodates over 7,000 students, fully resident in ultra-modern hostel facilities, with fully equipped faculty buildings and numerous staff housing facilities.  Canaanland also houses the Canaancity estate, other establishments operated by the church such as a bakery, a bottled water processing plant, petrol stations, various restaurants and shopping stores, several residential houses that provide for the over 2,000 church employees, and guest houses. Four banks are also located in this estate, three of which are branches of external commercial banks and one which is a community and micro-finance bank operated by the Church 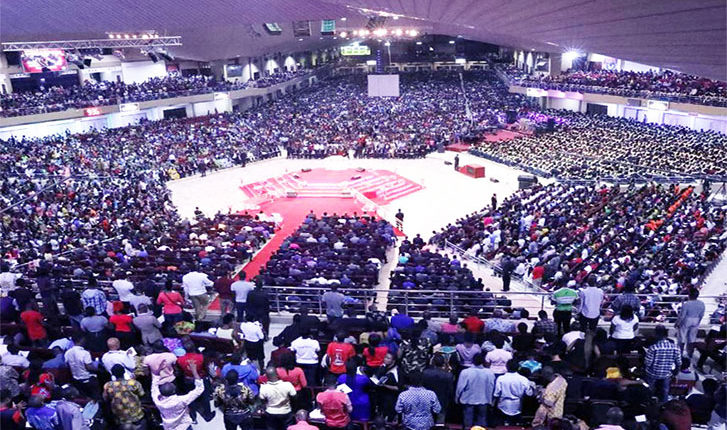